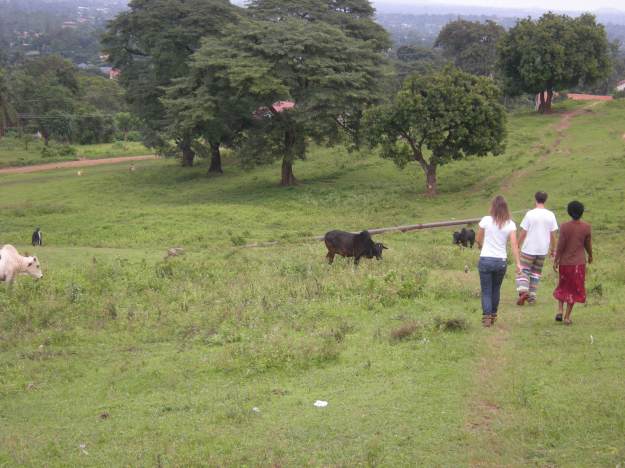 Coming back from the girl’s house. Credits: GalileoMobile / Philippe Kobel

We had met this beautiful girl on Tuesday early morning, during our last week in Uganda. We were trying to find a spot to shoot some interviews for our documentary in Mbale.

The weather had been rainy all the time during the previous weeks in Uganda, in such a way that our documentary producers could not shoot our interviews to the documentary due to the lack of light.

Thus, in our last week, we had to rush and record everything. The best day time to make the video shootings were after the sunrise or before sunset. Since we also had to be at schools during those times, we have decided to leave the hotel very early in the morning and walk around to find “the spot”.

And there she was, sowing the lands with other three farmer colleagues. We talked to them for a few minutes. The beautiful girl told us she was in college, studying Communication, but in order to pay the college fees, she had to work as a farmer, from 5:00 a.m. to 12:00 p.m. Then, in the afternoons, she would attend school.

During the rest of the week, we kept our ritual: woke up early in our quest to find more interview spots and talked to her on the way.

On Friday, the day we were leaving Mbale, and thus Uganda, we decided to say goodbye to our girl friend. We gave her some postcards from space. That’s all we had. She then invited us to go to her place and so we went. We walked a bit in the farm fields until we reached her place. She introduced us to her mother while she went to the henhouse. We did not have much time. At the moment we were leaving, she came back from the henhouse holding some eggs. She distributed one egg each. It was her gift to us.

Eggs and space cards were exchanged.

It was the most beautiful gift someone has ever given to me.

I miss talking to you, darling. You deeply touched my heart.

I hope we keep in touch.

Each van in which GalileoMobile have traveled is someway special. So I guess it is good to introduce all of them to the readers of our blog!

Let’s start with one of the last on which we have traveled.

I was confused when I saw the shuttle for the first time. The first morning, just in front of our guesthouse in Mbale I saw this blue “Triumph beyond the stars”-van. Was it a coincidence?

Our local Ugandan contact Betty explained that she someway managed to provide us  a Star-van for our everyday-route to the schools in In Mbale. The Space … ehm, staff Shuttle. Quite appropriate, isn’t it?

Each of the five mornings spent in Mbale the shuttle arrived at our guesthouse, we packed our material in the truck and then: Boarding, please! To go across the interstellar space … ehm, across the streets of Mbale!

The route to the schools was short, but there was always time for Betty to sing “Well done, well done, my GalileoTeam!”, the leitmotiv that accompanied us for the whole expedition: it gave us a lot of energy to be in an enthusiastic mood for the whole day. Yes, still now, to me the soundtrack of any image of the Shuttle is the “Well done”-song, one of the little ingredients to make the journey a fantastic experience.

Well done, Star-Shuttle, it was great to travel with you!

(You will see the Star-Shuttle and much more interesting things about GalileoMobile’s expedition to Uganda in the upcoming documentary “In the Land of Beauty”. Take a look at the teaser.) 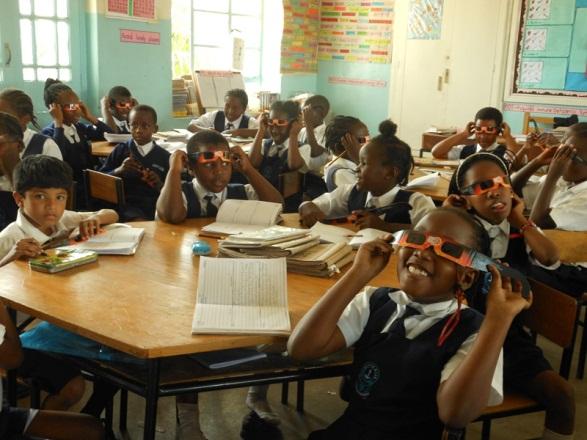 GalileoMobile named their recently held astronomy expedition in Uganda as, GalileoMobile in the Land of Beauty! The team were amazed by how green our country is and the trip took them from dancing with Ndere troupe to experience Uganda drams and dance in Kampala, to catching the rainbow at the source of the Nile, to blowing the flute at the Sipi falls and befriending the Chameleon while falling and trekking the muddy Sipi hills in Kapchorwa and standing at the Equator at Masaka!

But it was rare beauty indeed that was witnessed in this much endowed country on 3 November 2013! Uganda got to view the spectacular Hybrid total solar eclipse!

In Packwach at Owiny Primary School, the president of Uganda, his Excellence Yoweri Kaguta Museveni watched the total eclipse that occurred some minutes away from 5pm and the thousands of people from local and other countries of the world watching with him, broke in a moving singing of the Ugandan National anthem. The event was live on National UBC television that enabled the rest of the country to follow the eclipsing moments of these cosmic bodies! In Kampala, we were able to see the partial eclipse.

The Café Sci schools that participated in the September 2013 land of Beauty astronomy expedition phoned to say that the eclipse glasses donated by the Galileo Mobile made the event real for the students! St. Kizito reported to have made solar projections and will be sending the photos soon! This makes me fondly remember the importance of the special September expedition and how relevant the activities where to our students! Well done my Galileo Team!

Muhammed Khazali, a lover of astronomy, was able to avail 200 eclipse glasses through the Astronomy Without Borders Organisation! Three more Café Sci schools benefited! We also gave a pair of eclipse glasses to every member of my son’s class at Daffodils Academy! The school also gratefully received two Earth Balls (from GalileoMobile, much to the awe of children who gave me sweet complements and heard about GalileoMobile, Astronomy Without Borders and Café Sci for the first time! 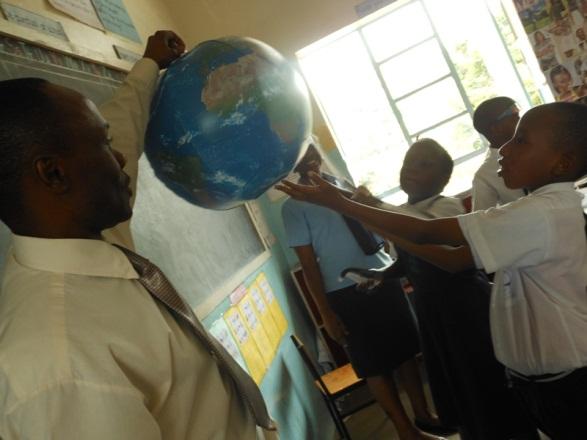 We have received the Earth Balls and are already distributing them to the schools which are very delighted to use them as a teaching tool in Geography and science lessons.

GalileoMobile visited our country and permanently stirred in our youngsters the love for the universe!