During the last week of June, Mars Academy took off in Rio de Janeiro

Mars Academy is more than just a well-intentioned project thought up by a bunch of ‘green’ young scientists with a desire to share their knowledge with kids who probably would never have such opportunity otherwise. It’s a mixture of good insights, lots of questions, life stories and a not-so-secret element, science. Shaken all up, these elements lit a spark on the lives of both the kids and scientists involved – Americans and GalileoMobile’s – and it was a pretty cool sight. GalileoMobile has done exactly that for a few years now and it’s good to see other projects with similar objectives popping up.

The pre-teens and teenagers from INPAR (Instituto Prebisteriano Álvaro Reis de Assistência à Criança e ao Adolescente), at the Cidade de Deus community, thought, after observing flowers bloom on Jaguanum island, near Rio de Janeiro, about how life flourished on Earth; and if there’s the possibility for life to evolve on other planets in the Universe. A camera mounted on a little rover was successfully used to explore the island above and below water. Tatiana, one of the teens exploring the island, said what most caught her attention was the ability to see oysters and life underwater without having to dive. “It’s really cool”, she said. It appeared to give a glimpse of how life is sought out in inhospitable environments such as Mars itself. 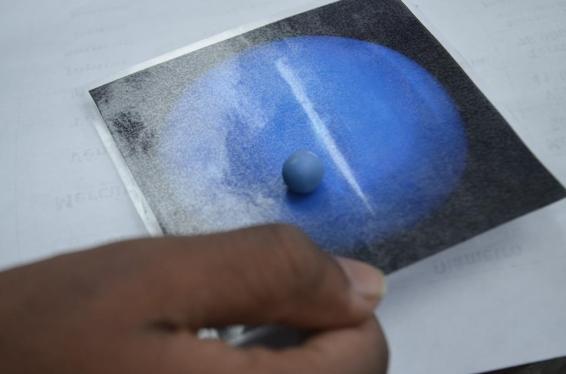 It has long been suggested that other bodies in the Solar System, besides Mars, might be suitable for hosting life. This idea was also introduced to the participating teenagers by the Mars Academy team. The students made a scaled representation of our Solar System to elucidate this topic in a more hands-on way and to add to the discussion of the physical properties of these planetary objects. The scaled model followed the activity ‘The Earth as a Peppercorn!’ from GalileoMobile’s handbook of activities, which was conducted by Mars Academy and GalileoMobile members. The students first had to calculate the sizes of the planets using a peppercorn as a reference size for Earth and then made their scaled planets out of clay. They proceeded with a calculation of the distances between the planets in the model and went to the school yard to place the celestial objects in the correct propertions. When it came to Jupiter, we could immediately recognize, as always, the feeling of awe that overcame them.

The use of the HiRISE camera also got the attention of the kids. They had to combine latitude and longitude to indicate where should we point the camera to on Mars. Dark spots, mounts and valleys seemed to have a special allure, but they weren’t the only areas students wanted to see. The astronomer Wladimir Lyra, also in charge of Mars Academy, made clear, that in case the observations of the chosen spots lead to a major breakthrough and a scientific publication, the INPAR kids in Rio will be co-authors of the study along with scientists Jeff Marlow, the CalTech geobiologist who initiated the project, and NASA researchers Paul Hayne, Carolyn Crow and Wladimir, all of them primarily responsible for Mars Academy.

If HiRISE will send a “Eureka!” message, whilst analyzing the areas chosen in Rio, is part of the second round of the project, planned in October. At that time, the Mars Academy scientists will return to Brazil and analyze the Mars photos together with the students. Right now, the pictures’ coordinates are waiting to be sent to the NASA camera over the next few months. Fingers crossed for the kids from Cidade de Deus and that they will hit the headlines of science news not too far from now.