Besides liking Astronomy, I like eating. In general, my memories are associated to a kind of ‘tastetrack’ instead of a ‘soundtrack’.

Rio Branco tasted like tapioca, cupuaçu and açaí. It was funny to see the first time my non-Brazilian Galileo friends taste açaí, the ‘super-fruit’, for the first time. The guys, Jorge (Spanish) and Nuno (Portuguese) loved it. On the other hand, the girls, Sandra (Spanish) and Mayte (Dominican/American), not so much. Edu, who’s also Brazilian, was in the middle: neither liked nor disliked it.

Having a cupuaçú juice at the market in Rio Branco. Credits: Patrícia Figueiró Spinelli / GalileoMobile

Rio Branco would always start with tapioca for breakfast. And, out of the blue, in the first day of our Brazilian trip, on August 4th, it also started with an interview to TV news program Bom Dia Acre.

It was a rush, but after the interview, we got down to business: the activities at the Visually Impaired Support Center (CADV), where several teachers who work with this parcel of the public took part at our workshop. There were also some visually impaired students who could evaluate the material. Besides them, there were more journalists! GalileoMobile in Rio Branco was definitely popular!

The activities with CADV teachers were really successful, a real Galilean exchange: we, teaching a bit of Astronomy to them and the teachers telling us about their ideas on how to produce other tactile materials within the theme. I love this creative capacity of Brazilian people! Let alone from our teachers! 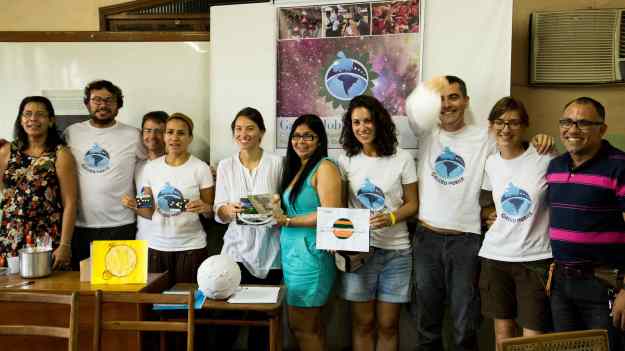 On our second day in Rio Branco, August 5th, we had a Training Workshop in Astronomy for teachers at the Xavier campus of the Federal Institute for Education in Acre (IF-AC).

On the third day, the workshops were directed to undergrad and Science Education students at IF-AC and also from the Federal University of Acre (UFAC). The auditorium was packed! Rio Branco students took part in it – but also Sena Madureira students, who had come by bus to the event. High School students of IF-AC didn’t want to miss it and joined us too!

It was buses here, students there, more journalists, photos, certificate emissions, and, help! Let’s make a pause to have a cupuaçú juice, please!

Full auditorium on the third day in Rio Branco.Credits: GalileoMobile

After these three days with events in Rio Branco, night was short. We had to pack and travel on the following day at 6 AM to Sena Madureira and run a whole day of activities, including the night sky observation. It took a lot of açaí to get all this energy. In Rio Branco they say açaí wakens even dead people, and so it had to be.