It all started with an e-mail sent in October 2008. Some keywords on it were: astronomy, education and travel, project, International Year of Astronomy 2009 (IYA2009). The sender: Philippe Kobel. The receiver: a bunch of PhD students. 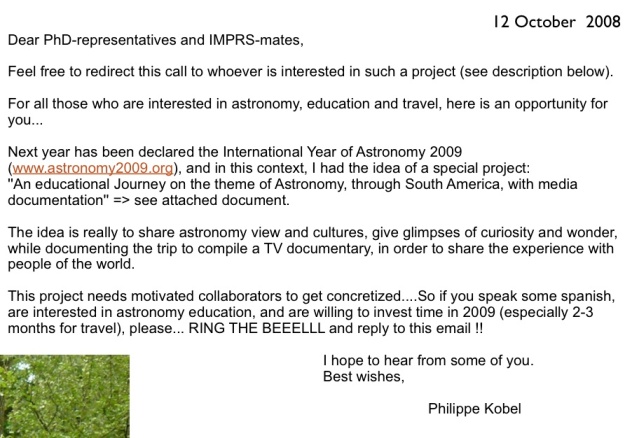 Motivated PhD students, a journalist and a social researcher based in Germany and Sweden replied to that call, exchanged messages with the goal of better understanding what the so-called GalileoMobile was and decided to accept the challenge.

The first meeting took place a couple of weeks later. Precisely, on the 22-23 November 2008, in Garching, Germany, at the student room in the basement of the Max Planck Institute for Extraterrestrial Physics.

In that day and place, GalileoMobile was born. The most spoken words were “let’s brainstorm” since everything had to be idealised from the scratch. What were GalileoMobile’s goals and vision? What did the project want to teach and to whom? Which countries would be visited and why? How should the project logo and motto be? How the work flow should be organised? And more important: who would sponsor this crazy idea? There were more questions than answers. Almost no answers, but many ideas. It was a beginning, indeed.

After months of hard work, the project was put in shape. Twelve enthusiastic European and Latin American PhD students planned and executed a two-month expedition to Chile, Bolivia and Peru, in October and November 2009. The goal: create a feeling of unity under the same sky using astronomy in the classroom. The targets: 33 rural schools. The innovation: a documentary movie production and the promotion of an interchange of cosmovisions. Because of all these novelties, GalileoMobile was designated as a Special Project within the IYA2009 framework and the team members managed to find sponsoring for this €70,000-worth initiative.

The whole idea developed into something much bigger than originally thought of and GalileoMobile rose the admiration of many astronomy enthusiasts around the world. The team received many encouraging expressions to keep on bringing astronomy to each and every corner of the planet. Thus, although at the time of creation, GalileoMobile was thought to be carried out only during the IYA2009 celebration, five years later, GalileoMobile is still running and is actively planning and undertaking new expeditions.

Over these five years, GalileoMobile has accomplished four projects: Chile, Bolivia and Peru (2009); a pilot project to the Bolivian Amazon (2012); India (2012) and Uganda (2013). In total, more than 8,800 students, 860 teachers took part of GalileoMobile activities and over 1,000 people participated in GalileoMobile public events. In addition, thanks to the individual initiatives of GalileoMobile members, extended activities were also developed in Portugal, Nepal and United States.

The team members have also been putting strong efforts to spread this idea around and inspire similar initiatives. More than 100 blog posts, 500 tweets and 1,000 Facebook publications have chronicled the story of GalileoMobile and its expeditions.

GalileoMobile even goes one step further. Each expedition has a product to show the richness of the world diversity and the exchange of people from all over the world.

5 years of GalileoMobile in numbers.

Up to now, 28 astronomers, communicators and educators originating from 14 different countries have devoted their time to GalileoMobile as volunteers. They are the persons responsible for everything GalileoMobile has produced in these five years: from the planning of expeditions, to fund raising, to educational material development, to this post you are reading now. Some members are part of the team since the very beginning, others have stayed for short periods, but all members share the same spirit.

Fabio del Sordo, an Italian GalileoMobile member, tells us how he feels towards the initiative:

“While some guys were meeting in Munich, during november 2008, to discuss about the funny idea of a journey in South America to speak about astronomy in small villages, I was traveling in northern Norway: It was cold, snowy and dark, and I could not attend this meeting. Nevertheless, a few weeks later, in December, I was passing by Frankfurt, on the way back to Italy. I was in contact with one of these guys, Philippe Kobel, who decided to pass by to meet me and discuss about that strange, visionary dream that now goes under the name GalileoMobile. I had to wait until following February before meeting all the people who formed GalileoMobile at that time, and now that I write, five years have passed.

As every intense experience, it seems one life and, at the same time, one day ago.

Five years of GalileoMobile in a nutshell, for me: learning how to turn a dream into reality, light a spark in kid’s imagination all around the world, understanding the meaning of being all under the same sky. And, I am sure, the best has yet to come.

“A great adventure! Having been part of GalileoMobile between 2011 and 2012 is an experience I am really glad and proud of. It was amazing to have been part of such a highly talented, passionate, competent – let alone smart! – group. I felt honoured when Nuno Gomes invited me to join and felt like everyone were friends I hadn’t talked for some time and got back in touch, so easy it was to mingle. I could see how great ideas and how positive change can happen when young people from several parts of the world get together and give away their time and energy to do something they really believe in. After all, improving (mostly underprivileged) kids’ contact with science is more than just giving them books to read. It is to help them see that they, too, can make their questions – and use tools to discover the Universe and make it their own. How not to love and admire that? I can only wish GalileoMobile goes further and keeps on helping people to look up and see we’re all under the same sky!”

GalileoMobile has changed in these five years, but it is still defined by the itinerancy and promotion of astronomy-related activities in regions with little access to outreach actions, while also promoting the dialogue about different visions of the universe.

Special thanks go to the partner and friend projects and programmes of GalileoMobile: Universe Awareness (UNAWE), Galileo Teacher Training Programme (GTTP) and A Touch of Universe (ATU).

3 thoughts on “Five years of GalileoMobile”